Medinah was organized principally in the office of Noble Dr. Vincent Lumbard Hurlbut, on the third floor of 47 East Monroe Street in Chicago. Our dispensation petition and charter petition were ratified, our first potentate and divan were elected, and our first nobles were created and obligated in that office.

Noble Hurlbut was among the most prominent of Freemasons, having been a charter member of the Royal Order of Scotland’s The Provincial Grand Lodge U.S.A. in 1878 along with the legendary but controversial Illustrious Albert Pike, an original noble of Mecca Shriners in New York; Imperial Potentate Walter M. Fleming’s Shrine Deputy for Illinois; Grand Commander of Knights Templar for Illinois; Grand Master of the Grand Encampment of Knights Templar of the USA in 1871; and the owner of “one of the best private Masonic libraries in the country” until it was lost in the Great Fire, coincidentally also in 1871. 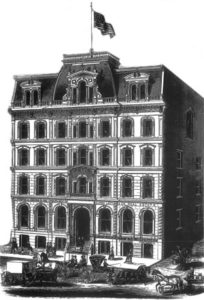 Our first permanent home was Oriental Hall at 122 16 North LaSalle Street. It was here on 30 March 1883, that the first Medinah Shrine Ceremonial was staged, complete with costumes and props, but without Potentate Tobey who was conducting a court-martial that day (Chief Rabban Dr. Marvin E. Smith presided).

Having outgrown Oriental Hall, we temporarily rented space in Corinthian Hall at 185 to 189 East 56 West Kinzie Street, whilst negotiating a lease with Apollo Commandery. Making due with the facilities in Corinthian Hall included rather questionable props. The Chicago Record-Herald reported “… here [at Corinthian Hall] some of the most illustrious citizens of Chicago ‘crossed the burning sands of the desert,’ the ‘burning sands’ consisting of cans, bottles and other junk with which the alleys of the neighbourhood were littered.” 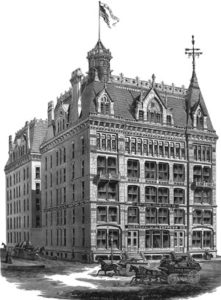 Returning to within a city block from Noble Dr. Hurlbut’s office, we enjoyed suitable space, both in terms of size and quality, by leasing the Egyptian Room of Apollo Commandery’s Monroe ‘Asylum’ (the Templar term for a lodge hall or preceptory) complex in the American Express Building. Designed by Henry Hobson Richardson for the American Express Company, the building was constructed in 1872 in the aftermath of the Great Fire of 1871.

As with the other three rooms, the Egyptian Room boasted lavish ornamentation; in this case, featuring Egyptian themed murals and detailed mouldings.

The asylum proper included a powerful pipe organ and what may have been the first horse-shoe balcony in a Freemason hall in the United States.

Interestingly, this building was also at the time the home of the Scottish Rite Valley of Chicago, whose leadership were enamoured with their stage facilities to such a point that they decided to make use of them to better illustrate the lessons of their degrees; the stage productions were so successful that “Chicago-style” degrees were adopted by the Scottish Rite in both the Northern Jurisdiction and Southern Jurisdiction, and valleys all over bought scenery from Brother Joseph S. Sosman’s firm, Sosman and Landis Scene Painting Studios of Chicago, to outfit their stages.

Despite being built with a 4,000-gallon reservoir in its attic, and a basement steam pump capable of propelling water fifty feet above the roof, building was gutted by fire on 17 June 1930.

The first home of our own was leased space in what became known as the Medinah Building at 176 West Jackson Boulevard #181, bounded also by Fifth Avenue and Quincy Street. We occupied the top two floors, as well as the towers extending up two additional floors on each corner of the building. It was acclaimed an architectural nightmare in its time. 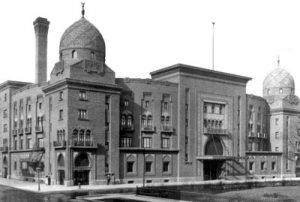 The first “mosque” owned by Medinah Shriners was the limestone church building at 935 Dearborn Avenue, which we purchased from Collier’s Unity Church, an offshoot of the Unitarian Church. The cornerstone was laid on 29 August 1867, and all but the outer walls were destroyed on 9 October 1871, by the Great Chicago Fire. Medinah Shriners purchased the building on 30 April 1903. The $62,000 purchase price was approximately equal to the cost of remodelling the former church for our use. The building faces Washington Square Park, popularly known in the early 20th Century as “Bughouse Square.” It was sold to the Scottish Rite Valley of Chicago by prior agreement when we moved. This building, along with the adjoining buildings and townhouse mansions, continued to be used as the Scottish Rite Cathedral until 16 November 2006; and the massive 1875 mechanical-linkage E. & G.G. Hook & Hastings pipe organ – which the Medinah Shriners moved during the renovation from the east end where the pulpit had been in the building’s era as a church, to the balcony in the west – is now Chicago’s oldest operative organ and the city’s largest 19th Century organ.

The so-called “small preceptory” in the adjoining building the Scottish Rite built to the south of the church building, while not relevant per se to this page, as it did not house the Medinah Shriners, may be of interest to many visitors to this site. The small preceptory served as a lodge hall, chapter hall, council hall and commandery asylum until the property was turned over to developers on 19 December 2006.

The church building underwent impressive restoration work following the sale of the property. The exterior stone was tuck-pointed, and the coverings over the windows were removed to expose both the plate glass above the front entrance, and the stained glass along Walton Street. Once the building was no longer needed for construction offices and materials staging/security, it returned to use as a religious venue. An evangelical “low Protestant” church acquired the venue and added floor seating to the large preceptory.

For four years, the Medinah Shriners were a band of nomads, with no permanent home of our own. While much of Medinah’s artefacts, costumes, and props languished in rented storage space, our Recorder and his staff administered Medinah from a simple office in an industrial park at 78 Eisenhower Lane North, in Lombard.

A site selected within the demographic centre of our membership at the intersection of Interstate Highways 355 & 88 and Butterfield Road was turned down by the membership in attendance. Some of the reasons cited were: No room for expansion, not enough parking, not visible from the highway, operating cost might have been too high, and not enough space for picnics. 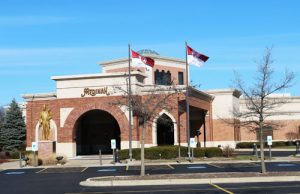 In June 2004, following a presentation by the architects of a new building concept, Potentate Jack Zimmerman called for a standing vote by the assembled nobles at the stated meeting, who unanimously took to their feet and approved the architect’s plans and the expenditure of $10,600,000 (in addition to the cost of the land, which had already been purchased) to build Medinah’s new Shrine Centre at what was then 550 North Town Center Drive, in Addison. As the foundation continued to be poured, the Village of Addison renamed the former Town Center Drive that serves as our driveway, to “Shriners Drive.”

Our Silent Messenger Statue was unveiled by Past Potentate Stewart B. Smith & Lady Florence Smith who made the funding of the statue her project during her service as Medinah’s 2001 First Lady. Potentate John E. Martin presided over the dedication and grand opening of Medinah Shrine Centre with the assistance of Imperial Potentate Gary W. Dunwoody (Scimitar Shrine) and the Honourable Larry Hartwig, Mayor of Addison. The festivities included a black-tie fundraising gala, tours, a picnic, a massive parade, dignitaries, and fireworks.

This lovely facility is available for weddings, seminars, Bar/Bat Mitzvoth, banquets and other events.