Why Should I Become a Medinah Shriner?

What is the Meaning of the Shrine Symbol?

Why do Shriners wear a Fez? The red fez with a black tassel, the Shrine’s most distinctive symbol, has been handed down through the ages. It derives its name from the place where it was first manufactured – the holy city of Fez, Morocco. The fez was chosen as part of the Shrine’s Arabic (Near-Eastern) theme, around which the color and pageantry of the Shrine are developed.

Why do Shriners wear a Fez? 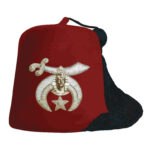 The red fez with a black tassel, the Shrine’s most distinctive symbol, has been handed down through the ages. It derives its name from the place where it was first manufactured – the holy city of Fez, Morocco. The fez was chosen as part of the Shrine’s Arabic (Near-Eastern) theme, around which the color and pageantry of the Shrine are developed.

What is Masonry and What is its Connection to the Shrine?

In order to become a Shriner, a man must first be a Mason. The fraternity of Freemasonry is the oldest , largest and most widely known fraternity in the world. It dates back hundreds of years to when stonemasons and other craftsmen on building projects gathered in shelter houses, or lodges. Over the years, formal Masonic lodges emerged, with members bound together not by trade, but by their own desire to be fraternal brothers. The basic unit of Masonry is the Blue Lodge, where members earn the first three Masonic degrees. There is no higher degree than that of Master Mason (the Third Degree), but for those men who wish to further explore the allegory and symbolism learned in the Blue Lodge, the Scottish Rite and York Rite elaborate on the basic tenets of Freemasonry.

What are the Steps to Becoming a Shrine Mason?

Every Shriner is first a Mason: however, in many parts of North America, Masonry does not solicit members. In these areas, no one is asked to join. A man must seek admission of his own free will. A man is a fully accepted “Blue Lodge” Mason after he has received and proved proficiency in the first three degrees, known as Entered Apprentice, Fellow Craft and Master Mason. After that, he can belong to many other organizations which have their roots in Masonry and which have Blue Lodge Masonry as a prerequisite. Only when a Master Mason has proven proficiency in the Third Degree can he petition to become a Noble of the Mystic Shrine.

Where did the Shrine’s Near-Eastern Theme Come From?

The Shrine is as American as baseball, hot dogs and apple pie. It was tied to an Arabic theme by its founders, Billy Florence, an actor, and Walter Fleming, a physician. Fleming and Florence realized the fledging fraternity needed a colorful, exciting backdrop. It is believed that Florence conceived the Shrine’s Near Eastern setting while on tour in Europe. As the legend goes, Florence attended a party in Marseilles, France, hosted by an Arabian diplomat. At the end of the party, the guests became members of a secret society. Florence realized this might be the ideal vehicle for the new fraternity, and he made copious notes and drawings of the ceremony. When Florence returned to the States, Fleming agreed, and together they created elaborate rituals, designed the emblem and costumes, and formulated the salutation. Though the Shrine is not itself a secret society, it still retains much of the mysticism and secrecy of its origins. The Shrine supported various charities almost from its inception. In 1920, however, the organization voted to adopt its own official philanthropy, dedicated to providing free orthopaedic medical care to children in need, and the first Shriners Hospital was built in Shreveport, LA., in 1922. The Shrine’s philanthropy eventually expanded to 22 “Centers of Excellence.”